Surrounded by Six-Fours-les-Plages, Saint-Mandrier-sur-Mer and Toulon, La Seyne-sur-Mer is a sought-after resort on the French Riviera, charming. Backed by the wooded area of Cap Sicié, it has many fortifications which served to protect the harbour of Toulon, including the forts of Eguillette and Balaguier. 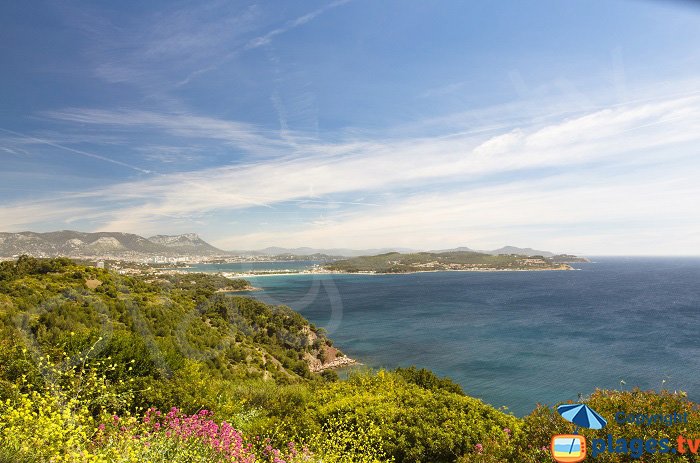 A panoramic view of La Seyne and Saint Mandrier 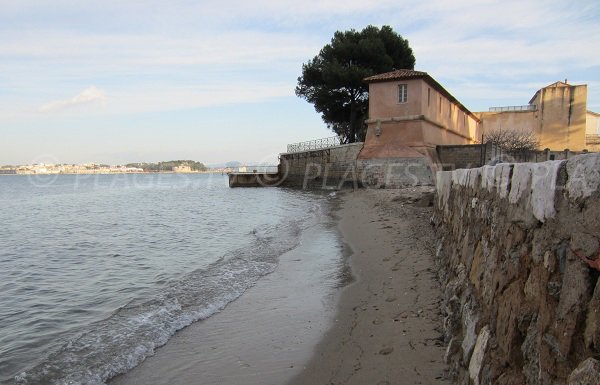 In the foreground, Fort Eguillette and on the left, Toulon

Discover the architecture of the city while strolling through the area of Tamaris and the old centre, which are small wonders, and admire the Bay of Lazaret and Sablettes. Tamaris is located on the Corniche with a magnificent view of the Mediterranean. George Sand stayed there as well as Michel Pasha, who built a castle, magnificent villas and a casino. Both have contributed to the fame of this area and we are delighted its 20 kilometres of coastline that seduce tourists and where many beaches are equipped to the delight of families in particular. Hidden coves in the hollows of Cap Sicié, will attract those seeking peace and quiet. 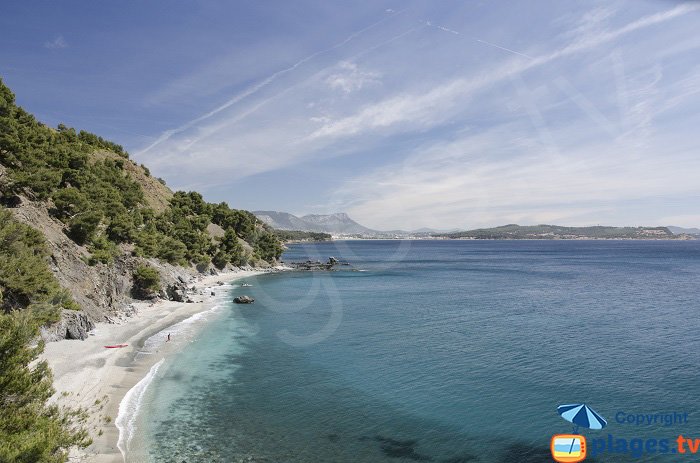 Jonquet Cove, probably one of the most beautiful coves of the south of France

Eight beaches in total, from Jonquet in the south which is reserved for naturists to that of Fort de l’Eguillette, are available to tourists, as well as the beaches of the peninsula of Saint-Mandrier: those of the Canon with its naval ship, the Coudoulière, the Cavalas ... But it is the beach of Sablettes that attracts the most people. It is huge and surrounded by many restaurants. 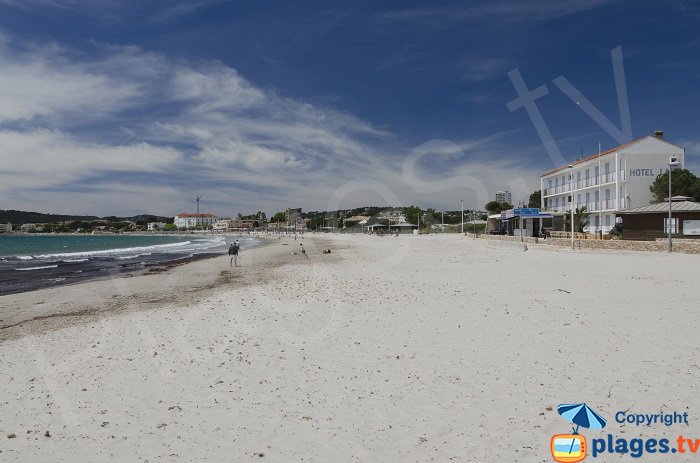 A huge beach in La Seyne with many shops 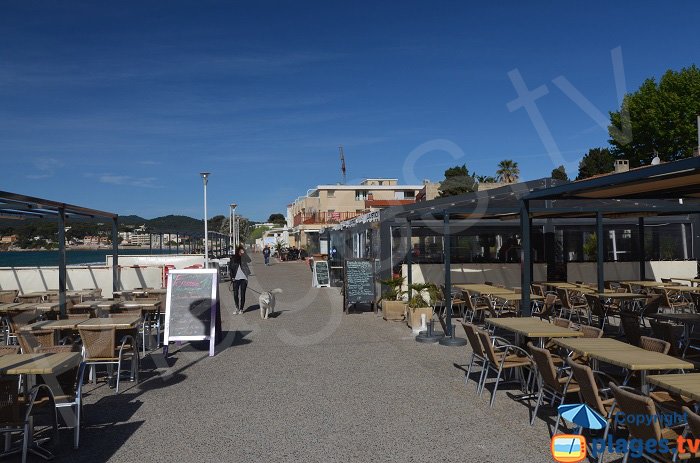 The restaurants along the beach of Sablettes

Those looking for a little peace and quiet will head for the untamed beaches of La Seyne (area towards Cap Sicié). The beach of La Verne is very authentic with its small fishing boats (“pointus”). The beach is supervised in the summer season and there is a small restaurant. 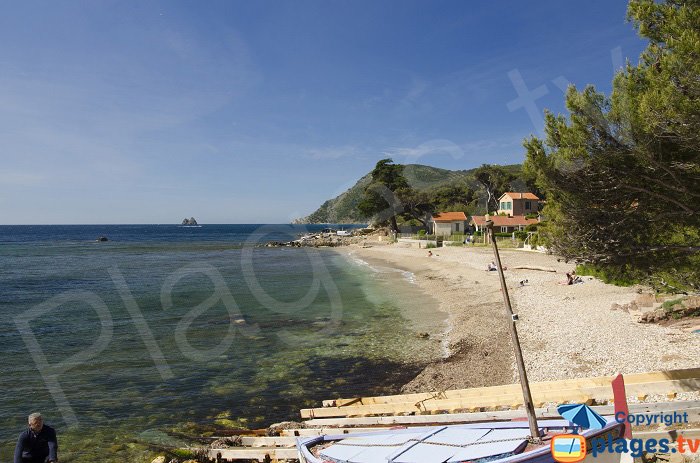 The beach of la Verne with its “pointus”

Throughout the year, La Seyne-sur-Mer hosts many festivals and events based on jazz and Cuban culture for example (Festival of Bayamo), without forgetting the circus! 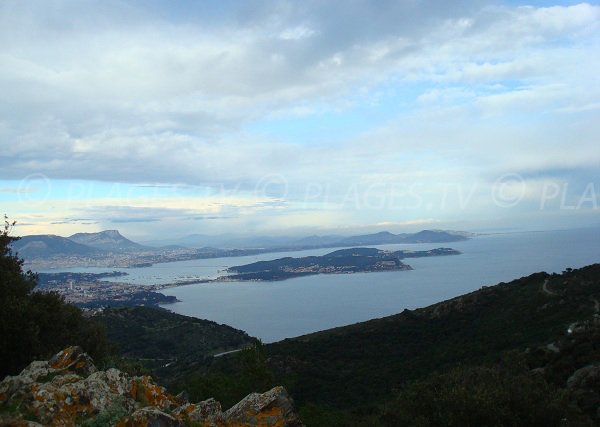 Lovers of hiking will find their paradise in the Massif du Cap Sicié and the Jonas forest that consist of many trails. You can access it from the Fabregas Beach and specifically by the beach trail that will lead you to Notre-Dame-du-Mai, perched at 360m above sea level. The walk is a little bit difficult, but the final view is worth it! 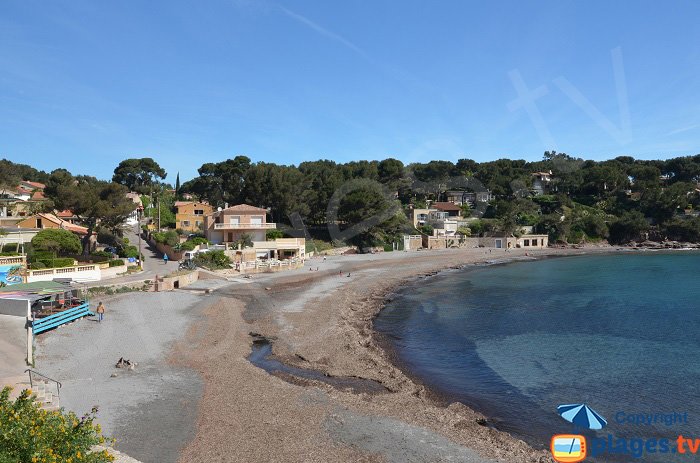 The cove of Fabrégas with its beach huts on the sand 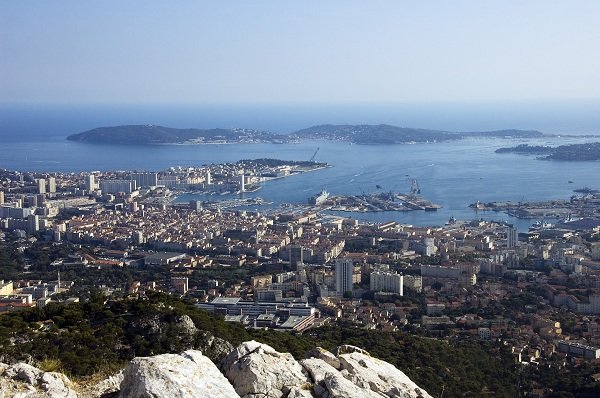 Toulon harbour and the peninsula of Saint Mandrier in the background

In 1821, Napoleon built the Fort of the same name; worth a visit with its many contemporary art exhibitions that are organized. It is also here that the jazz festival and Bayamo are held. Fort Balaguier has an interesting museum and is just outside the Tower of Toulon. During your stay, why not visit Toulon! Only sixty kilometres from Marseille, it also has many coves. The fishermen’s huts, typical houses, the gardens of the Tour Royale Tour and those bordering Mourillon Beach or the Porte de l’Arsenal, there are so many things to discover. Nine beaches and many coves, that of Mitre and San Peyre are equally nice. Nearby, the peninsula of Saint-Mandrier, Porquerolles island and even Corsica are within easy reach of Toulon. In the Provencal countryside, discover La Vallette, a medieval village and La Garde, on a rock, that offers a panoramic view of the hills and surrounding cliffs.
On the other side, Bandol, Sanary-sur-Mer and further a field, Cassis with its coves… why not visit today! 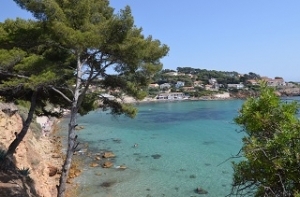 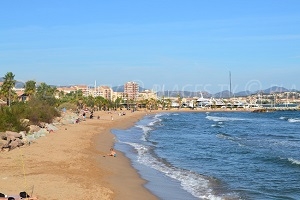