Seaside resorts and beaches in Corsica 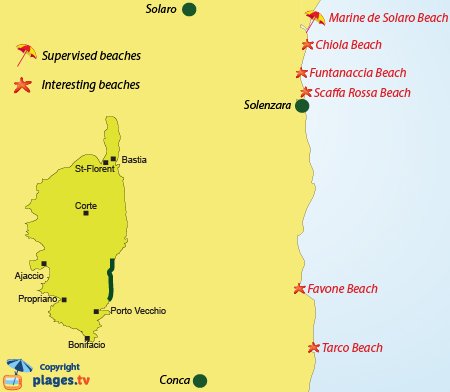 Côte des Nacres is located 30 minutes north of Porto-Vecchio (it starts after Sainte Lucie de Porto Vecchio) and straddles the departments of Haute-Corse and South Corsica. The national road reaches this part of the East Coast and the shore is less hilly compared to Southern Corsica. There are still some nice little coves; the most beautiful of the eastern shore, which will become very linear and flat from Solenzara.
The resorts of Côte des Nacres are less crowded and more family-oriented than the resort of Porto Vecchio. Solenzara is the largest and busiest in summer with a marina. It also obtained the Blue Flag. The hamlets of Favone and Tarcu are located further south, and they have lots of holiday resorts.
The beaches of Côte des Nacres are very different from the other beaches on the Eastern Shore. In the south, there are beautiful sandy coves, well equipped with straw huts and convenience stores. North of Solenzara, the coastline is less rocky. The long strip of sand of the East Coast begins with a succession of large sandy beaches, accessible by the national road.
Apart from the seafront, the needles of Bavella are worth a detour. It is the opportunity to discover the many natural pools and waterfalls of the river Solenzara.